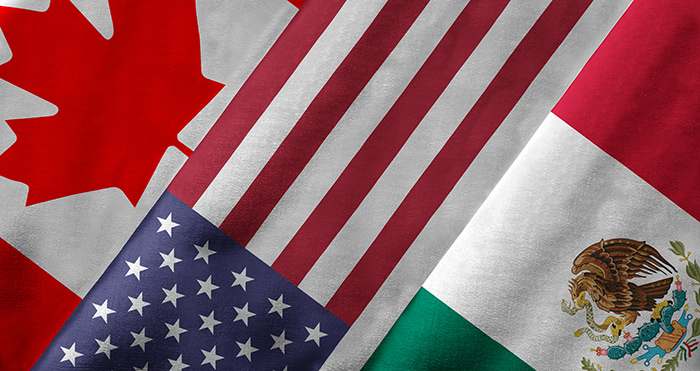 The U.S., Mexico and Canada reached a revamped NAFTA deal in the 11th hour on Sunday September 30th, 2018. NAFTA 2.0 has been renamed the United States Mexico Canada Agreement (USMCA).

After more than a year of intense negotiations, the U.S., Mexico and Canada reached an agreement to update NAFTA. NAFTA dates back to 1994 when the pact was originally signed by all three countries to govern the $1.2 trillion worth of trade between the countries.

In August, the U.S. and Mexico resolved an issue over auto manufacturing but Canada and the U.S. still had some contentious points to resolve. The U.S. wanted Canada to open its dairy market to U.S. farmers and Canada wanted to preserve a mechanism for resolving disputes. These goals were eventually achieved which resulted in the new USMCA.

Starting in 2020, to qualify for zero tariffs, a car or truck must have 75% of its components manufactured in the U.S., Mexico, or Canada, a boost from the current 62.5% requirement. In addition, also starting in 2020, cars and trucks should have at least 30% of the work on the vehicle done by workers earning at least $16 an hour, which will gradually move to 40% for cars by 2023.

Learn How To Ship A Vehicle Into The U.S. Or Canada

Canada agreed to set new quotas for dairy imports from the U.S. Canada will still put tariffs on dairy products that exceed quotas. The new quotas will give the U.S. access to 3.6% of Canada's market. U.S. farmers will now be able to export 120 million eggs into Canada the first year. This will grow 1% per year for the next 10 years. The chicken concession will allow 57,000 metric tons phased in over six years and in year 7 will increase 1% per year for the next 10 years.

Canada wanted to keep Chapter 19 in place and in the end Chapter 19 remained intact. Chapter 19 allows the U.S., Mexico and Canada to challenge anti-dumping and countervailing duties in front of a panel of representatives from each country. In the past, Canada has successfully used Chapter 19 to challenge the U.S. on its softwood lumber restrictions.

The USMCA has a new IP chapter, which is 63 pages long and contains stricter protections for patents and trademarks, including biotech, financial services and even domain names. Copyright terms in Canada now extend for 70 years beyond the year the creator of the work dies, bringing Canada in line with those of the U.S. and Europe. The IP chapter also includes an extension of the length of time new biological drugs will be protected from generic drug competition, up 2 years from Canada's previously agreed upon 8 years to 10 years of exclusivity. This was necessary for all sides to update this field as the original agreement was over 25 years old.

The de minimis threshold or the duty-free amount Canadians can buy in the U.S. and import into Canada without having to pay a duty has increased from $20 to $150. Mexico agreed to raise their de minimis from $50 to $100.

The tax portion of the de minimis threshold has been separated. The new rules will see the tax threshold rise to $40.

For example, when someone in Canada buys something online in the U.S. for $149 they will be spared the duty but they will pay anywhere from $17 to $22 in taxes depending on the province and the tax rate for that province.

Significant upgrades to environmental and labor regulations were made, especially in Mexico. Mexican trucks crossing the border must meet higher safety regulations and Mexican workers must have the ability to organize and form unions.

Chapter 11 provided companies and investors a special process to resolve disputes with one of the governments of the agreement. The premise being that if an investor put money into a project and then the government changed the rules, there is a dispute process outside the court system where the investor could get their problem resolved. Chapter 11 is essentially gone with the exception of few industries such as energy and telecommunications.

The USMCA will not go into effect right away. Most of the key provisions will not start until 2020. The leader of each country still has to sign the agreement, and then congress in the U.S. and the legislatures in Canada and Mexico have to approve it. This process is expected to take months.

How Will The USMCA Affect You?

You have the opportunity to get an early edge on your competitors with the advantage of a trade advisor. Pacific Customs Brokers has you covered with expert trade advisors who are able to help you navigate the changes that will affect you with the new United States Mexico Canada Agreement.