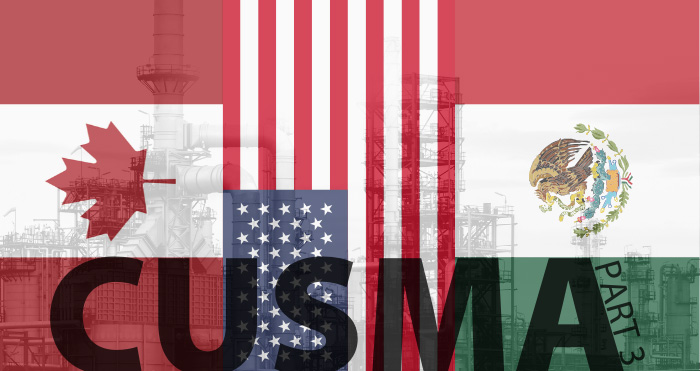 If you are just joining us, this is part 3 of a 4-part Q&A series. Coming soon, on July 1st, 2020, the long awaited NAFTA 2.0 agreement between Canada - US - Mexico is due to be implemented.

In part 1 and part 2 we quoted Shakespeare's famous “What’s in a name” line because despite the three participating countries having their own name for it, the agreement itself is one in the same regardless of where you are in the world. In Canada the agreement is known as “CUSMA”; in the US it is referred to as “USMCA” and in Mexico, it goes by “T-MEC”, so although a different name, please note they are all referring to North America’s new agreement.

Before we dive in again, below is a quick recap of the series so far.

Is It True That Some Imports Won’t Have Any Duty Or Taxes?

Yes! But only for very low value shipments. The CUSMA/USMCA/T-MEC includes increased De Minimis levels. De Minimis (which is latin for “about minimal things”) allows shipments with a value below a certain threshold to enter Canada duty free, and in some cases tax free.

The current value threshold for importing goods into Canada is CAD$20 and that will increase for express courier shipments (postal shipments not included) imported directly from a CUSMA/USMCA/T-MEC country, regardless of the country of origin, as follows:

I Have Advance Rulings Under NAFTA, Can I Still Use Them Under CUSMA/USMCA/T-MEC?

If you have Advance Ruling(s) for origin issued under NAFTA they will not be valid under CUSMA/USMCA/T-MEC. This is for the same reason that a NAFTA Certificate will no longer be valid; because the product/good was assessed against the NAFTA rules of origin which are different from the CUSMA/USMCA/T-MEC rules of origin. You will need to apply for new advance rulings.

What If I Import Textiles, How Will I Be Affected?

Textile and apparel goods can utilize Tariff Preference Levels (TPL) in order to import a certain amount of textiles at a reduced rate of duty. Commitments previously established under NAFTA have been largely maintained with CUSMA/USMCA/T-MEC. Two differences to note; the quota will decrease for wool apparels from the US and will increase for cotton/man-made fiber apparels from the US.

How this works is that the courier presents certain specific details about the shipments they are transporting to CBSA, such as Importer name, description of goods, value and country of manufacture to CBSA at the time the goods enter Canada. CBSA approves the importation based on this information and allows the shipments to be delivered without a formal customs entry. The customs broker provides final accounting for these shipments after they are delivered to the consignee.

With the implementation of CUSMA/USMCA/T-MEC, the CLVS threshold will increase from CAD$2,500 to CAD$3,300 for all imports, regardless of country of origin. This will allow for a more streamlined, hassle-free, import process for these low valued shipments.