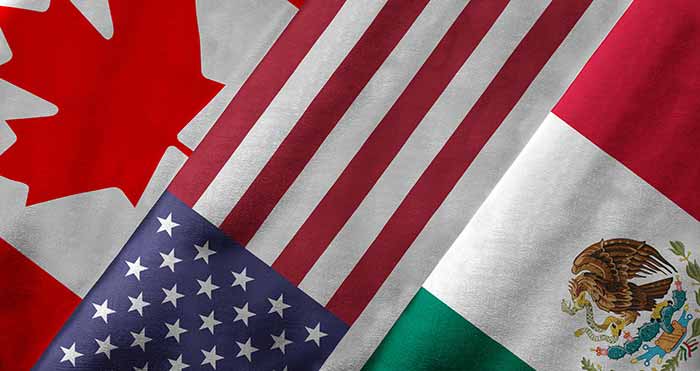 Updated: The Free Trade Agreement between Canada - US - Mexico, also known as CUSMA/USMCA/T-MEC has been implemented. Please visit our NAFTA 2.0 series for more information.

Everything You Need To Know About CUSMA/USMCA/T-MEC

Do The NAFTA Negotiations Really Affect You?

If you are engaging in cross-border trade and investment you need to stay informed on the recent news in the North American Free Trade Agreement (NAFTA) negotiations and other trade agreements with Canada;

This week marks the start of the 5th round of NAFTA talks in which Mexico, the U.S. and Canada hope to make considerable progress on the NAFTA text.

For the past 23 years, NAFTA has tied together North America's economy through predictability, openness, and collaboration. The creation of NAFTA in 1994 marked the largest Free Trade Agreement (FTA) in the world. NAFTA removed previous barriers to encourage the flow of goods and labor between the Canada, the U.S. and Mexico.

In 2017 the U.S. is prioritizing employment for American citizens. Along with the renegotiation of NAFTA, the U.S. government withdrew from the Trans-Pacific Partnership (TPP) negotiations. This would have seen 12 of the top economic countries eliminate trade barriers to encourage international trade. The U.S. ultimately decided to withdraw from the TPP to prioritize protecting American jobs.

With the latest rounds of negotiations, the U.S. released a series of what Canadian Foreign Affairs Minister, Chrystia Freeland, considered "unconventional proposals" challenging the 23 years of predictability and collaboration. The two main concerns, specifically highlighted by Freeland are:

The U.S. auto-industry has stated cars containing less than 50 percent U.S. auto parts should be subject to a tariff to encourage Americans to buy and sell cars locally. This is a problem for Canada and Mexico because it will affect current supply chains leading to an international disadvantage, as well as a loss of jobs for Canadians and Mexicans.

For the currently enforced dispute-resolution system the U.S. wants to ensure enforcement on disputes are non-binding or voluntary, therefore, eliminating the importance of any future rulings.

The U.S. has been aggressive in the negotiations because they are less dependent on NAFTA than Canada and Mexico. If NAFTA were to fall apart for all three countries, Canadians and Mexicans would lose a substantial amount of jobs and opportunities. However, Canada has leverage as the current largest export market for the U.S. The two nations also have the previously established Canada - U.S. Trade Agreement. Although the agreement is outdated, it does provide a fallback for ongoing trade.

Canada's priority in the negotiations is to stop the U.S. from implementing tariffs on goods previously being traded freely. While the U.S. has prioritized the removal of Chapter 10, which allows foreign access to Government procurement, Canada intends to safeguard it.

Furthermore, Canada is also looking elsewhere to strengthen trade ties. CETA was introduced on September 21st, 2017 and will reduce, and in some cases, possibly eliminate tariffs between Canada and Europe. These changes will open up new opportunities for Canadians and Canadian businesses. In November of 2017, Canada and the 11 remaining signatories of the TPP reached an agreement to move forward with the CPTPP.

Mexico's priorities in the negotiations are similar to Canada. They want to prevent the United States from placing tariffs on products that are currently being traded freely. The U.S. imports approximately 80 percent of all Mexican exports. Mexico is the second largest export market for the U.S. As a result, any further complications would encourage Mexico to strengthen its trade relations with other countries.

How NAFTA Affects You?

Changes in trade can be extremely disruptive to your business and investments. Whether NAFTA folds or is successfully re-negotiated is still to be determined. However, one thing is certain, international traders who utilize this trade agreement can expect to see a change in how they trade after a decision on NAFTA is reached.

Pacific Customs Brokers is always here to help you stay informed with NAFTA and the ongoing negotiations between the U.S., Canada, and Mexico.